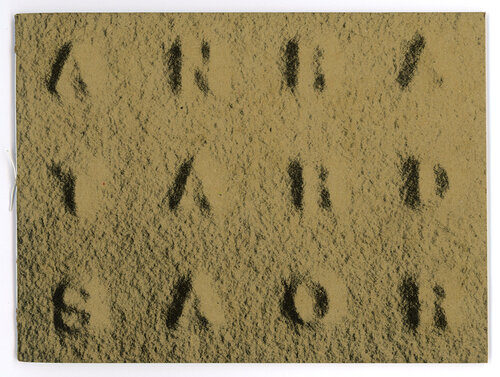 On Tuesday 2nd July 1940 while on the way to Canada the Arandora Star had been torpedoed off the coast of Ireland by a German submarine. The luxury liner turned troopship had just been converted to a prison ship, equipped with some armaments and overpainted in battleship grey. It was adopting the zigzag course typical of a warship reducing its vulnerability to torpedo fire. On board were 1678 people: Italian, German internees and German prisoners of war, military guards and crew. Less than half of the passengers survived the shipwreck. A few days later one of the 14 rescue boats came ashore at Knockvologan beach, empty. It is still there, under the sand.

In the publication Arandora Star, Derek Crook, Seth Crook, 2 poets of the Ross of Mull and Miek Zwamborn try to get the boat under way again. On the 4th of July 2019, the pamphlet was launched between the two remaining hooks, the only visible evidence of the vessel. A group of 30 locals gathered around the boat and some took their own poetry and stories. After this event the local priest asked us if we could organize this yearly, which we decided to do.

On Sunday the 12th of July 2020, we gathered around the hooks again to honour the victims and to keep the story alive.