Geodes jump up beneath the hammer. The crust the blows must break through is hard. The blows don’t break.

The grinding wheels turn, the agate grinders lie in pairs on their stomachs on tilting chairs. They push hard against the wetted abrasive wheel: one leg crossed over the other, their feet braced in the central aisle.

Sometimes, one of the tilting chairs is unmanned. The torso is not prepared for this and neither is the agate. A body of stone, a body of flesh and a body of wood all strain together.

The hollowed out log on three or four legs bears the grinder. Does he learn to swim above the stone? The tilting chairs lift up the workers. Their shoulders sink through the wood. They reach blindly for the blocks of polishing agent on the floor: fine-grained green and red silicon dioxide.

Outside, the geodes are deposited by size. Someone sorts and weighs the stones.

At first sight, just an ugly surface. Only from the weight can it be inferred that mineralized liquid has been aligned inside. After cleaving, the saw.

A second geode breaks open. The hammer lies to the side untouched: somebody has already swept up the splinters. A sock is a solution but once again there is an element out of place: a stone in a sock, a man on a buck and a hand pushing against a wheel. The men lie right in front of the wheels. The image is undecipherable without a caption.

After half an hour of grinding, the gloss is sweetened and the dyes penetrate the stone. The agate grinders hang perpendicular to the axis of the water wheel as though seeking shelter. They wear dark woolen coats, powdered like butterfly’s wings. Only the supervisor has tied on an apron.

The grooves and ridges in the sandstone wheel allow rounded forms to be created. The original veins are still visible. They were once on their way to becoming a square but have stalled, become entangled in everything that has gone before them.

‘Vapours can penetrate each other,’ Caillois says, ‘lines can weave and dodge’. The stone is now where the coal stove used to be. The grinder turns the agate.

Geodes are often empty. The reflection comes unexpectedly, it is both concave and convex. Smoke is blown into the room; wisps climb the walls. The fluids move effortlessly, like mudslides startling cities after prolonged rainfall. Everything is swept away and flooded.

The room is flooded, the agate blocks access, it lies in the immersion bath, is smooth in appearance: a monument of domestic stone surrounded by a floor of water, the grinder’s hand, a doorway, a broken wall and a hole that provides a view.

In the middle of the workshop, a large agate, as shiny as a floor.

The agate grinders talking with hoarse voices. They polish the shrinking bubbles and glassy trails. Dust has collected in their lungs.

The wear and tear is minimal. The porosity can vary from band to band, it is permeable. Lines chase each other. Stripes follow the silhouette. A mineralized, fluid. Each new layer is genius, ingeniously derivative, a word that is whispered, so that it ends up on the other side of the room with a slightly different meaning. These are just five steps.

While the echo still hangs in the workshop, the original attempts to remain recognizable. Empty and white, an airy prism, an opaque variety of stone viewed through stone: a system of parallel lines where the lines bend at every turn. No crystals due to lack of symmetry.

The agate waits in splendor, a gleaming behemoth. A pedestal wrapped in cooling rags carries its weight. The grinding dust blows out through the window. One can still clearly make out the external lines. 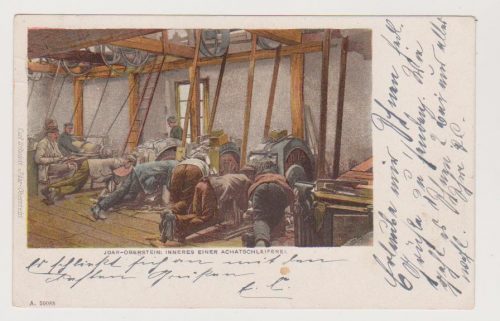