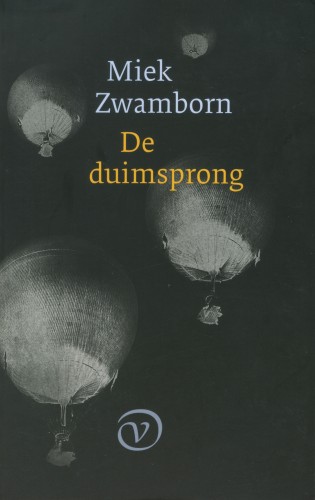 ‘Following Heim on his trek filled a void in me. I was no longer alone; Heim and Jens were walking beside me, the shadows of two men that enabled me to stay in the mountains for days. It felt as if Heim had invited me himself this time. He walked a few metres in front of me; I was almost able to grab hold of the tail of his coat.’

In De duimsprong, a young woman parts ways with Jens after hiking together in the mountains, and they agree to meet up again soon. However, when Jens goes missing without a trace, she isn’t able to understand or come to terms with his disappearance. She starts retracing their route on the quest to find him again.

During her search, she encounters the striking Eduard Spelterini, Richard Owen, Marie Vöglin, Mary Anning and the figure of Albert Heim (1849-1937), a geologist who documented the Swiss Alps. Her physical hunt for Jens is intertwined with a biographical investigation following in Heim’s footsteps across Europe. She becomes acquainted with the (love) life and work of this renowned geologist as she attempts to find out why Jens could have disappeared. As she wanders, her own story unravels from these two perspectives.

In De duimsprong, Miek Zwamborn demonstrates the scope of the contemporary novel, using a combination of fiction and non-fiction to sweep the reader away on a journey past landslides, Alpine panoramas, mountaintops and the lesser known peaks of nineteenth-century science. The associated stories conjure up a passionate and richly illustrated picture of this fascinating world.