Diving For The Right Words

Summer 2020 my seaweed anthology Wieren will appear in excellent English translation by Michele Hutchison at Profile Books and Greystone Books.

There is nothing more delightful then working together on a manuscript. Michele came over to Mull to finalize the translation and wrote a weblog for the Dutch Foundation for Literature about our lovely collaboration and grand time under water.

Here you can read about the process:

On translating Seaweed: An Intimate Portrait by Miek Zwamborn

Miek Zwamborn’s charming, diverse and poetic book on seaweed begins with a description of a rather alien-sounding piece of seaweed. I thought I could picture it, but it didn’t match anything I’d ever spotted along the coast before.

As I was about to walk to the Scottish tidal island of Erraid at ebb, I came across an immense chunk [?] of seaweed beached in the bay. Its dark leaves and stems contrasted strongly with the pale sand. The seaweed gave a lively impression and spiralled like an Archimedean screw. The outgoing tide had tugged the leaves open wide. A sturdy stem emerged from a large gold-studded ball; not round but flat and wide, bordered with amber-coloured ruffles. 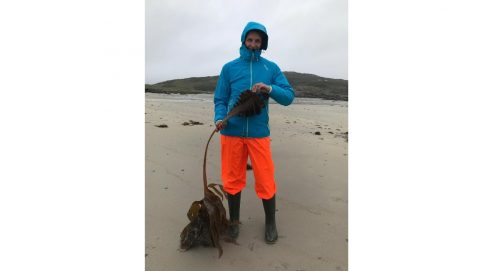 In real life, it was this. While the Dutch text calls it literally ‘an immense seaweed’, English requires it to be a piece or strand or chunk or clumpof seaweed. Originally I’d had ‘clump’, my mind focussing on the multiple ruffles, but this was to overlook the long stipe, I discovered, once I held the object in my hands. Clump made it sound more compact and less weird, more like bladderwrack than kelp. A ‘seaweed alien’ was how I’d have described it, only that wasn’t what Miek had written. An immense seaweed plant? But that sounded odd too. Piece sounded too small, chunk sounded like it was only a part of the plant and stranddidn’t convey the weight or mass of the thing. Branch brought the wrong shape to mind. ‘Broken-off piece of kelp’ was where googling took me but at this point the reader shouldn’t know it was kelp. The point was to discover along with Miek what this strange thing was. Chunk then after all?

When I started on the project Seaweed: An Intimate Portrait had been published in Dutch (as Wieren) by Van Oorschot and in German (as Algen) in the Naturkunden series. Miek had worked closely with Bettina Bach on the German translation and between them they had produced a different text from the original, with a different set of illustrations. Rather than translating from the Dutch book, Miek sent me a new Word document with the German changes taken in. She also invited me to visit her in Mull once I had a full draft since this would save a lot of emailing back and forth. I think she sensed that the English version would undergo further shifts, as though each translator were a tide washing over the text, disturbing its seabed and revealing new finds. 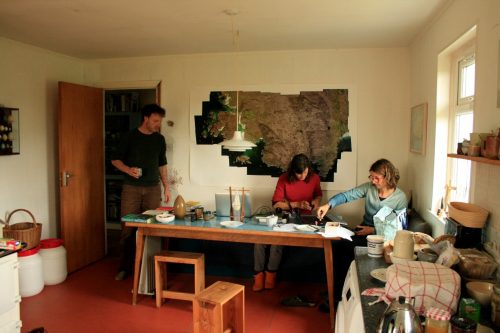 Working in the author’s kitchen

Never has a visit to an author been as revealing as this one. For a start, the seaweeds I’d described suddenly took on an actual shape. I could feel their textures, examine the colours, the strange ruffles, the holdfast – like a knobbly therapy ball. Now I could go back through all the descriptions and check they evoked the same shapes, that the words I had chosen still fit. I could experience the beaches Miek had walked across, the large quantities of seaweed washed up like dead mythical beasts, or that formed a reeking wall, or that fanned out delicate and colourful on the sand like Matisse’s collages. The writer’s fascination became palpable and I became infected with the same enthusiasm.

The book contains a number of recipes, which had not been tried out by the Dutch or German editors so I suggested to Miek that we make them while I was there. ‘We’ll have to pick some of the weeds underwater,’ Miek explained, ‘we’ll need to dive… wearing wetsuits because the water’s very cold.’ And so my knowledge garnered from looking at seaweed washed up on the beach was deeply enriched by being able to see it underwater. The first time I put my face in the water and looked down through the snorkel mask was a revelation, like a door opening onto another dimension. Banks of kelp beckoned to me, layers of different seaweeds tangled and untangled in the current. Now I could study the way the algae swished and swayed and the way Miek’s writing had tried to mirror those movements. 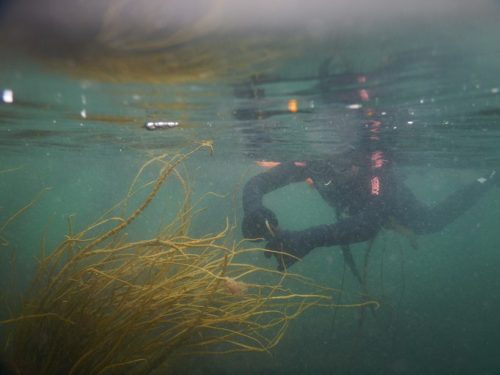 Here I am collecting sea spaghetti

Once we’d collected our exciting harvest, we set to work on the recipes. Instructions that had appeared vague to me now made sense, though we made various adjustments. Miek, who is a fantastic cook, had perfected her recipes over the course of time and now realized some of the steps were not necessary, or that the ingredients should be added in a different order. For example, pepper dulse should be added to hung curd at the very start of the process, not halfway through, to give more flavour. We also experimented with seaweed biscuits, finally deciding to reduce the amount of sugar to make them tastier. The recipe for the traditional Scottish Carrageenan Cream needed no such intervention and was consumed eagerly by all. 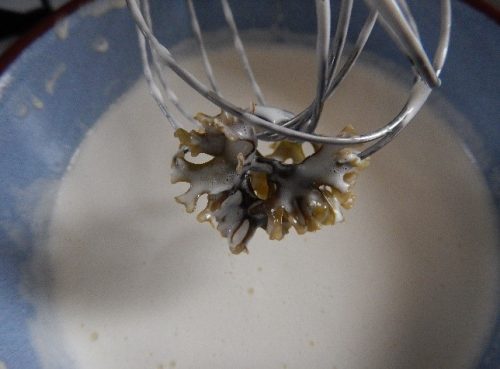 Carrageenan Cream in the making

Meanwhile, the book’s English editor, Mark Ellingham of Profile Books, had also sent some revisions and interesting new additions and we worked organically, adding these new sections as we went through my questions to Miek and her comments on the translation. Seaweed: An Intimate Portrait now exists in three parallel but different versions, all by the same author but with input from her different translators and editors. A synergetic process more than pure reproduction, making the most of the fact that translation always brings change. 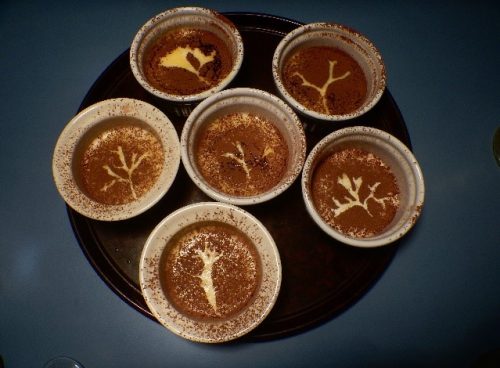 With thanks to the Letterenfonds for a travel grant allowing me to get to Mull and to Knockvologan Studies for providing accommodation.