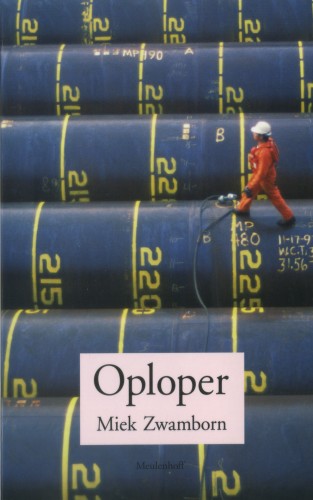 ‘I think I need to be alone. It’s a peaceful way of tenderness, extensive and safe. Beauty is rigorous and demanding. You have to wait for it, study it, push it, and hug it intimately to force it to show itself. I hadn’t given much thought to it. I was ready to give up everything.’

A young woman goes looking for meaning in a world that’s not her own. She searches the expanses of the high seas, in old, mechanical machines and the stories of the island’s men. This novel is the diary of a journey. The island sails from Angola to the Gulf of Mexico, but the reader doesn’t notice much movement. The world in which the story takes place is limited to the reality on the island: an environment that moves as a whole, in which travels are embarked upon, things happen, observations are made and lots of things don’t happen and are left unspoken. In the same way in which a composer works with time, uses instruments and provides a direction for a piece to be played cantabile, Miek Zwamborn conjures up rain, stages a meeting and leaves tools lying around. This book could be the song she hums whilst cleaning the machinery, pushing buttons and pulling levers to get the apparatus to work.