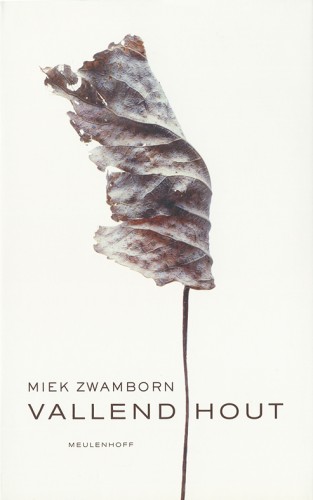 Vallend Hout is an understated story about a garden maintained by two people. In the pouring rain, they each have their own way of taking care of the greenery. They plant, weed, cut and saw to keep the garden under control.

Miek Zwamborn interweaves precise descriptions of the changes the garden undergoes with practical everyday advice for garden maintenance. She uses a simple style, itself subject to a pair of secateurs, forcing language into a state of hibernation that runs in parallel with the state of the garden.

Siep grew mistletoe. The branches he’d cultivated on the trees at the back of the garden helped prevent nightmares. Every autumn he’d cut down the green twigs to reap his reward at Christmas. To grow his mistletoe, Siep didn’t wait for the thrushes to knock the berries onto the branches in the garden. He’d keep part of the harvest separate from the rest. In winter he’d spread out the berries on the trees that favour a bright spot, like poplars, maple trees and lime trees. He’d then take the white balls between his fingers, press the sticky seed out of them and rub it into the hollows in the young wood he’d sanded down. If it turned out well and the berry didn’t dry out or get washed away, the seed would germinate a couple of months later. The germ would point straight up. After searching and turning a bit, it would slowly dive towards the twig and attach itself to the tree branch, swelling as a result of it. Then, small leather leaves would appear. The simple forking branches would grow until they formed a thick sphere that didn’t have a top or bottom; no sun to grow towards, no earth to take root in. It would take on a enclosed form, focused on its own centre, thriving at the coldest time of year.